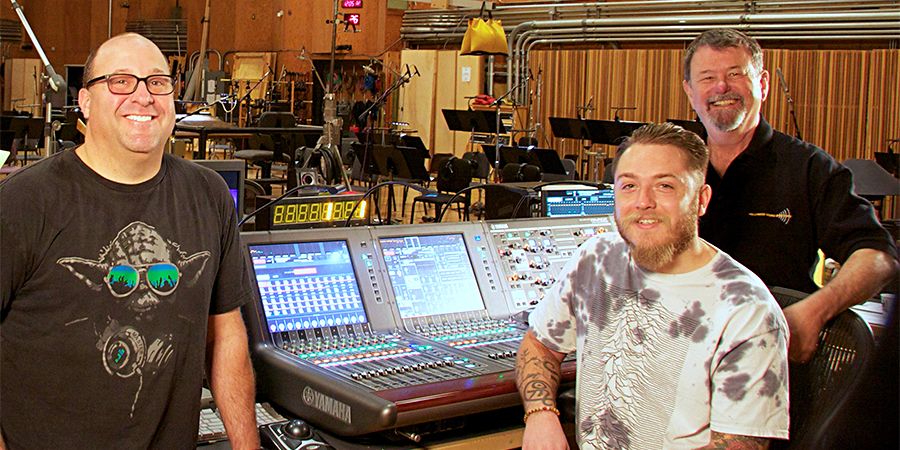 One of the world's half-dozen premier scoring stages for orchestral film work, The Newman Scoring Stage at 20th Century Fox recently took delivery of a Yamaha PM10 Digital Audio Console thanks to the efforts of Hollywood Sound Systems.

"Stage engineer for The Newman Stage, Denis Saint-Amand, established the criteria for what Fox was trying to achieve when replacing the monitor console at their film scoring stage," states Les Harrison, President of Hollywood Sound Systems. "We first proposed a solution four years ago using a Yamaha PM5D and DSP5D which achieved the necessary channel count and the ability to silently recall setups without fan or fader noise on the recording stage. Conversations continued, and other manufacturer's products were considered. In 2017, we proposed the new Yamaha RIVAGE PM10. The Fox team viewed the console at a trade show and we were asked to move forward. A proof of concept based on an earlier project was mocked up, and the team visited Hollywood Sound where 112 orchestral tracks on Yamaha Steinberg's NUAGE system were fed to the PM10 and the material was bussed and distributed to an array of Yamaha MSP5 monitors. This allowed us to "mimic" the way the Fox operators were used to working and to reinforce and audibly "visualize" where and how the many headphone mixes would be deployed.

Harrison said, "it was paramount that the chosen console be leading edge technology without being risky. It had to be reliable and robust like a touring product but compare favorably in an environment whose benchmark is a $1.5 million dollar console that sits 20 feet away. The Fox team was impressed with the evolution of the new Yamaha console and tossed ideas around on how the PM10 could be helpful in setup, reliability, and operation. A final demo for management was scheduled at The Newman Stage, with Kevin Kimmel from Yamaha at the helm. It was soon decided that a purchase would be planned for their new fiscal year."

"All of the clients who use The Newman Stage benefit from the PM10 console with its increased reliability, sonics, and recall," says Harrison. Since installation, the Yamaha console has been used on such films as The Greatest Showman, The Mountain Between Us, Ferdinand, and TV shows Orville, American Dad, Family Guy, and Empire.

Saint-Amand added that the pre-requisite was a low noise floor, minimal latency, and quick and efficient scene recall. "The console has to co-exist silently and efficiently within the studio along with all the musicians, microphones, and hardware associated with recording an orchestra and chorus. The Yamaha RIVAGE layout allows a comfortable ‘heads-up' operator position with what we need on the top layer. We can't afford to be looking down all the time paging through layers as the operator is located behind the conductor and non-verbal communication with hand signals, or even just a quick "look" is essential." Operators, Damon Tedesco, who has had experience with the Yamaha CL5 in live work, and Peter Nelson who is experiencing Yamaha consoles for the first time, both came up to speed quickly."

Tedesco and Nelson are the lead operators using the PM10. "Up until now, the Fox operators (Stage Managers) have worked with a custom-built analog desk designed for their own unique workflow," notes Harrison. "They work in a demanding world that involves the most talented and skilled musicians and technicians under extremely specific, tight time lines. So reliability, sonics, and ease of operation are their highest priorities. Damon, Peter, and Denis are pleased with the console and it integrated cleanly and efficiently on The Newman Stage requiring zero downtime."

Saint-Amand further added that, "scoring mixers Armin Steiner and Shawn Murphy were very supportive of the upgrade, and their input was invaluable and instrumental in our decision. At one point Steiner, who has been working at this stage since the seventies, was in the control room with our custom NEVE 88RS and we asked him to listen to the headphone send from the RIVAGE console. He gave a great big smile saying it sounded not unlike what he was hearing in the control room. Murphy had experienced the PM10 in his work with the Pacific Symphony in San Diego and agreed that it would do a good job. The session players were even quick to acknowledge the sonic improvements and made a point to compliment the stage crew."

"The Yamaha RIVAGE PM10 does everything Fox asked for and more," Harrison concludes. "Its feature set is deeper than what they routinely utilize but that means that what they do use, is of the highest standards. It is not a custom one-off, but a product with deep experience and support behind it. Denis gave it a compliment by saying that it has become like an appliance; he gives it no more attention when he comes into the studio than he does turning on the coffee pot."