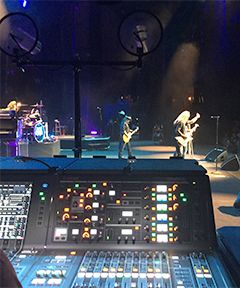 BUENA PARK, Calif. (July 21, 2016)—Special Event Services (SES) of Winston-Salem, NC recently purchased a new Yamaha PM10 Digital Audio Console and immediately put it out on tour with monitor engineer David Baker for Lynyrd Skynyrd. “After having owned many of the original PM1Ds, we were eagerly awaiting its successor, states vice president/co-owner/head of audio, Jason Farah. The Yamaha PM1D was such a reliable platform, there was no question we'd add the PM10 to our inventory.”

Farah said SES still owns and uses Yamaha digital consoles in their inventory. “They have proven themselves to be the most reliable consoles we've ever owned, he said. And yes, brand familiarity was indeed a factor in the purchasing decision. The PM10’s higher channel count, greater flexibility, and ease of use make this console well suited for many applications. High input channel count, high output buss count, pre-amp modeling, customizable banks, and easy-to-use layout are all great benefits of this system.”

“After using the PM1D for years, I was quite interested in the new RIVAGE PM10, said monitor engineer Baker. The audio quality is simply amazing with the new mic pre’s and Rupert Neve Designs input on EQs and plug-ins. This console is far and away the best sounding system I have used. Couple the sound with great ergonomic layout and capabilities, and you have a desk that is easy to operate and capable of handling the most demanding mixing tasks. On top of the new features and plug-ins, you have Yamaha’s well-tested reliability. I am enjoying mixing now more than ever, and the RIVAGE PM10 is a big part of that equation.”

Farah said Lynyrd Skynyrd is one of the company’s oldest clients, and the band works a great deal throughout the year. “This initial PM10 will be in use by them for the majority of the year. Everyone commented on how good it sounds! I know now that they've done several shows using the PM10 in the monitor position, everyone in the band has commented on how much better everything sounds. They are all thrilled to have the new system on the road with them.”