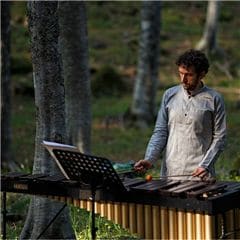 He played together with the most prestigious Italian orchestras such as Filarmonica della Scala, Fenice of Venice, Maggio Musicale Fiorentino, Opera of Rome, Orchestra Mozart, Comunale of Bologna, Lirico of Cagliari, Massimo of Palermo, Filarmonica Toscanini.

Alongside the career of performer he combines both teaching and research, realizing edition for percussion music (in 2012 Casa Ricordi published his reconstruction of the unedited composition Golfi d’ombra by Fausto Romitelli), and holding conferences (Hochschule für Musik in Basel, Ferienkurse für Neue Musik in Darmstadt, University of Strasbourg) and masterclass.

He recorded for Aeon, Neos, Kairos, Stradivarius, Wergo and has been broadcast by Rai Radio3, HRT (Croatian Radio), ORF (Austrian Radio), Deutschlandfunk; in 2010 Skyclassica-television has made a documentary about him for the format I Notevoli. In 2011 he was awarded with the “Silver Lion” at the Biennale Musica di Venezia with Repertorio Zero. From 2009 till 2012 he had been artistic director of the Festival Percussione Temporanea in Reggio Emilia. He collaborates with the Maramotti Collection, contemporary art museum as music consultant.

In 2015 he was professor at conservatory "Cilea" in Reggio Calabria. At present he is teaching at Conservatory "Canepa" in Sassari. He studied percussion with Francesco Repola, Jonathan Faralli, Eric Sammut (Conservatoire Nationale de Paris-CNR), Christian Dierstein and Marcus Weiss (Hochschule für Musik in Basel), and Musicology at the faculty of literature and philosophy in Bologna.