Great pianists have always regarded the ability to listen back to their own performance as vital. Piano playing is not just about playing the right notes; the tone must be rich and varied, played with imagination and a full range of dynamics to match the colours of an orchestra.

In 1905, the Welte-Mignon company launched what they called their ‘reproducing pianos’ now known as player pianos.

Firstly and most simply, the Disklavier Grand Piano is used to record a performance. The internal memory which saves the key and hammer movements in up to 1024 gradations, enables what has just been played to be reproduced with identical sound quality. One can listen to oneself from different parts of the room, change the tempo of the playback by up to 50 % (with no pitch change, of course) or the relationship between movement and sound can be analysed using a synchronised video camera. Students use this to practice and improve before competitions or concerts. ‘Inaudible mistakes’ can even be detected in the form of brushed keys that don’t sound.

Research into interpretation and evaluation of practice using a Disklavier Grand 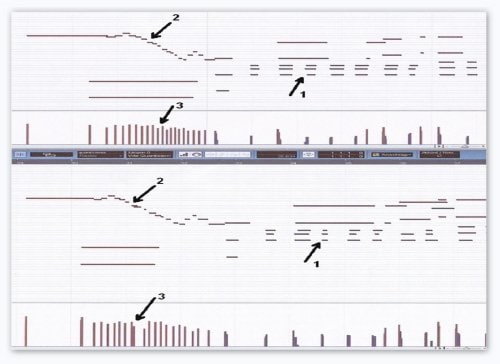 Not all students are content with improving simply by listening to their performance. It is often helpful to actually ‘see’ oneself play. In this case, the recorded piano performance is visualised using a sequencer program.

The diagram on the right shows how this is done, using a part of Beethoven’s Sonata Pathétique op. 13. The diagram shows bars 4 to 5:

There are clear differences with regard to the precision of chords (1), the regularity of scales (2) and the homogeneity of tone and dynamics (3). On hearing the playback, the upper pianist gives a much more professional performance, and this can be confirmed visually.

If we move away from the didactics of piano playing and focus on the musical performance, we can reveal the basics of interpretation. When analysing various performances, the differences between agogics, dynamics, tone, balance, articulation etc. become clear. Even artificially produced interpretations can be be played back and compared acoustically through the Disklavier grand.

Hermann Gottschewski, University of Tokyo, regularly travels to Freiburg to carry out research on composers such as A. Berg, J. Brahms and compositions with irrational lengths of tone.

Increasingly, composers are also using this accurate sound implementation facility; the Disklavier MIDI export/import feature allows the grand piano to be controlled directly by a notation program, following in the footsteps of Conlon Nancarrow.

We can also connect several Disklaviers to a network via the internet in order to facilitate music lessons over distance (Remote Lessons). Teachers, students and duo partners are able to interact across continents. The Disklavier always sounds like an acoustic piano with hammers and strings, and internet connectionspeed cannot affect the sound quality even between continents.

The last application to mention is the use of the Disklavier as a vocal and instrumental répétiteur. The Disklavier can be used to prepare for those all-too-few rehearsals with a real-life répétiteur. The rigid tempo and original dynamics of the recording can be adjusted with a Wii remote. The combination of Wii and Disklavier/MIDI was developed in Freiburg.

It is clear that there are many new possibilities for the classical piano and there appears to be no end to the potential for further development.